“Solía escribir con su dedo grande en el aire […] papel de viento […] pluma de carne / He used to write in the air with his big finger […] paper made of wind […] quill made of flesh […].”  By creating a space that blurs the divide between subject and object, Peruvian poet César Vallejo sought to express the potency of life in the act of writing on the wall by Pedro Rojas, a figure based on the real life stories of the executed railroad workers in Burgos during the Spanish Civil War.  Cement, body, and writing:  ephemerality’s rawness interpellating an outside.

The gesture in Vallejo’s verses kept coming to mind when I ran into some “Cement Tags” on the streets of Madrid, a series of street interventions by muralist 3ttman (France, 1978). 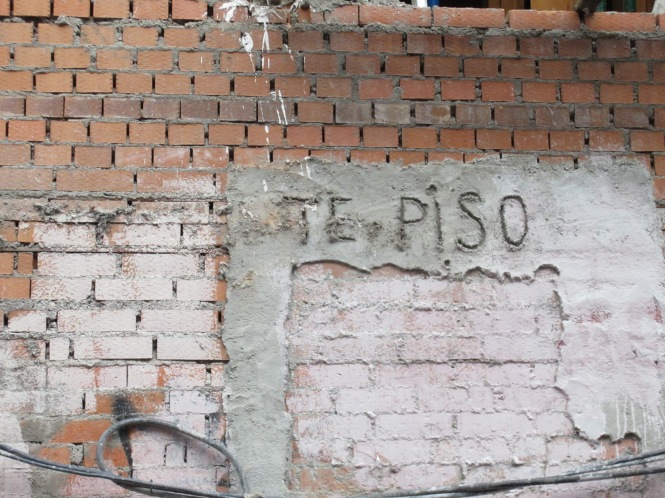 The pieces consist of messages written on self-laid cement.  In several interviews, 3ttman has how he got to work with this technique: seeing children write their names and messages on fresh cement.  Rafael Schacter has noted that 3ttman’s production “purposefully blurs the boundary between art and craft,” challenging “prevailing conceptions of ‘correct’ practice in both fine and public art” (The World Atlas of Street Art and Graffiti,  2013: 297).

What remains of “Más obra, menos arte / Less waffle, more action”, Calle de la Luna, 31 May 2014. To see shots of “Mas obra, menos arte” from 2012, see this post in the site Escrito en la Pared.  The post includes a brief video by 3ttman on the making of this cement tag. 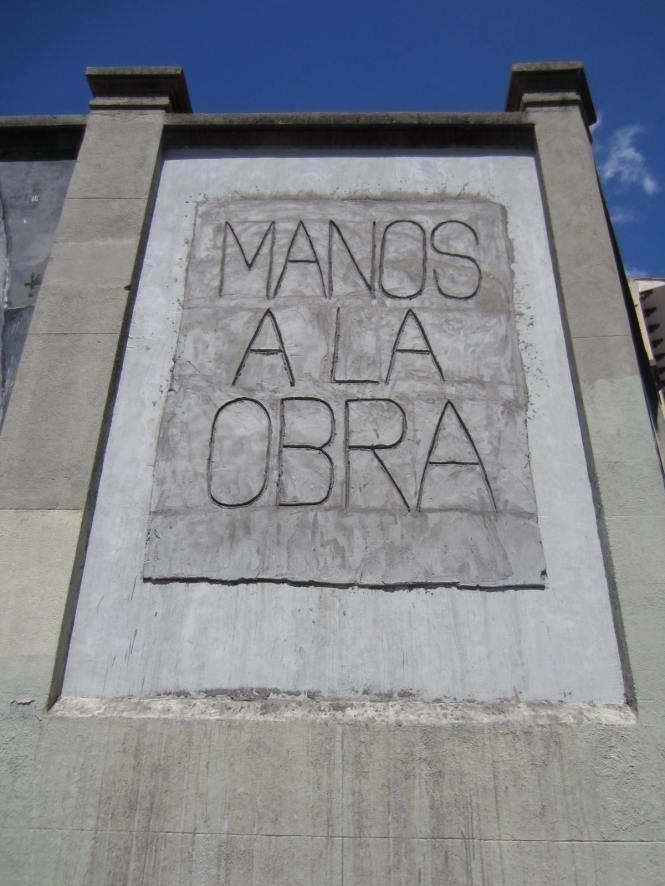 The tags that center on the polysemous word “obra” also function as a device that makes visible different ways of relating to the city.  On the one hand, the word “obra” brings back the up to recently ubiquitous image of the construction site and of “obras públicas” (public works), a notion that invokes Spain’s approach to development and the lavish spending of public monies on the  “white elephant building projects” associated with it during the construction boom (1997-2007).   The materiality of the pieces–cement and bricks–connects the threads that composed the cycle of accumulation peculiar to the Spanish state, as explained by Emmanuel Rodríguez in “Madrid puesta a punto” (2009):  the commodification of land, the subordination of public spending to that fraction of capital composed by the financial sector and large construction companies, and the ‘re-absorption’ of family income through the purchase of housing and services. On the other hand, the ephemeral physicality of the writing on cement by 3ttman and of the tags covering his pieces also points to a desire of a different kind: hands on the wall, uninvited writing, messages for everyone interpellating an outside: a work on the street. A work in progress, a potency of life.

Read 3ttman’s posts on “Cement Tags”:  this link includes a wonderful interview (in English) with photographer Alberto de Pedro, which is also an impressive documentary piece of  that series (2011).  For an earlier street action (2009) click here.

There are a number of interesting posts on and interviews with 3ttman in these pages: PAC, OUTSIDER, Somos Malasaña, El País,

2 thoughts on “Writing and Cement”