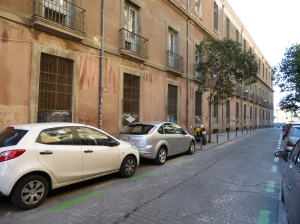 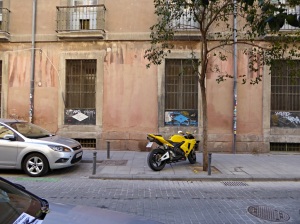 Eight or nine wheatpaste cows that have morphed in the last several months: complete figures, warped areas, semi-covered sections, loss of color, the passing of time.  Street practices: wheat paste cows whose materiality and location produce a rumor that interpellates you and to which you go back time and time again.  A “matter out of place” of cows in the city that interrupts the flat  languages with which neoliberal institutions and their media pretend to construct our collective experience. 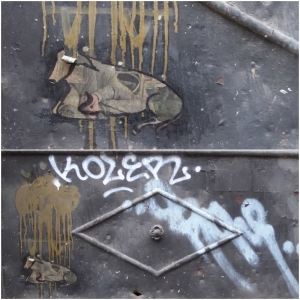 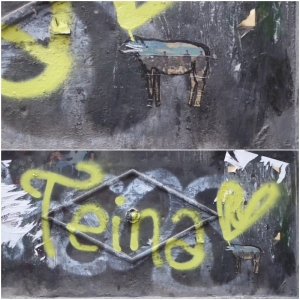 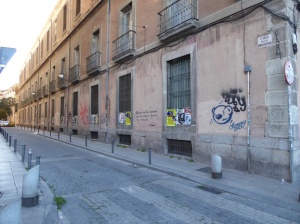 Marks on the wall, marks on paper, rust, signatures, messages, pieces of street art: irreducible desires and layers of experience.  To produce wheat pastes = work: come up with an idea, discuss it, draw the figure: cut it: make the wheat paste, go out to the street:  choose and prepare the surface: wet the surface, smooth the paste, attach the figure, cover it.  The wheatpaste cows are ephemeral artifacts affixed to the building of the old tobacco factory. That encounter produces a potency as it opens up contiguities and memories: the tobacco factory was the workplace of thousands of women who, at different times from 1809 to the late 20th century, took to the streets of Madrid and were protagonists of the city’s history in their struggle for labor rights.  Street practices:  factory work largely unknown and now re-visited in the walks organized by Colectivo La Liminal / aesthetic work of visual artist Dorle Schimmer placing unexpected cows on the city walls  /  the work of citizens like redesycalles passing by: go out to the street, plot routes, rehearse ways of listening, document the street practices, produce shared landscapes.  The wheatpastes on the metal plates of the old factory produce an amphibious space where different ways of occupying the public space meet and ignite each other.  In a recent video, Colectivo Los Ingrávidos circulate from Mexico a reminder that resonates globally:  “The rulers do not only want to make labor cheaper.  They want labor to cease to be what it was for almost two centuries:  a space of struggle and of  shared power” (Nuestras aulas-nuestras calles) .  Take to the streets:  work with them:  weave historical connections and generate languages to produce and inhabit shared landscapes.