Walking by different districts in Madrid on my way to work I run into several stencils,  graffiti, and interventions that focus on the cuts in social budgets and on the labor precarization that have been imposed on the people living in the Spanish state.  With the potency inherent to non-authorized cultural production, these pieces make visible what Slavoj Zizek calls systemic or institutionalized violence.

In Violence:  Six Sideways Reflections (2008) Zizek argues that it is in the circulation of capital–in the “self-propelling metaphysical dance of capital”–where the “fundamental systemic violence of capitalism” resides  (11).  Depressingly, this is nothing new: the interests of global capital take precedence over the needs of people and of life on the planet. The icons, declaratory texts, and figures that compose these stencils and graffiti on the streets of Madrid confront the passersby with the devastating effects of systemic violence on people’s lives and interrupt the aseptic official discourses of neoliberal capital and its Newspeak (in Spanish, neolengua): structural reforms, salary moderation, mini-jobs, mobility, flexibility, advantageous loans, to mention just a few.  In the unexpected encounters with the spray-writing on the walls, an ephemeral and public writing open to all, there emerge spaces for reflection, as well as questions about rights won arduously after decades of struggles and that are being swiftly taken away, questions about writing as a cartography for possible worlds, about the several neighborhood projects that are creating models of life sustained by solidarity and social justice. 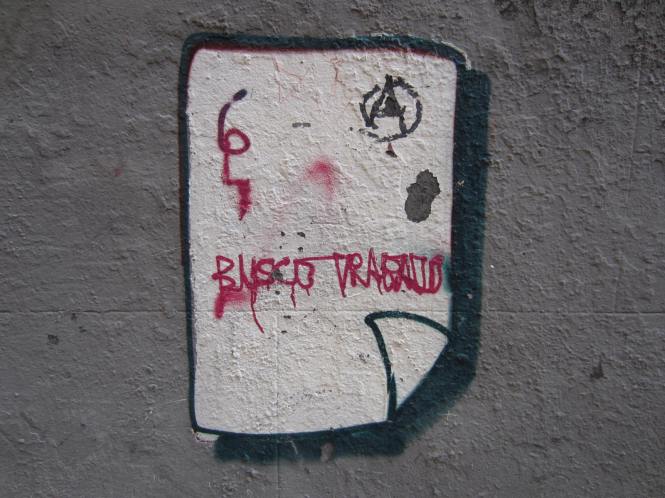 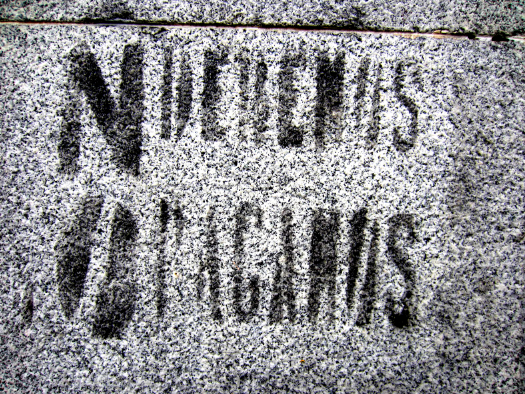 Anonymous stencil: “Who owes what to whom”. Avenida Reina Victoria, fall 2013.

To see pieces by Por Favor, visit his gallery on tumblr.  You can see Dos Jotas‘ work here. You can find Yipi Yipi Yeah’s work in their webpage.

You can read about the campaign Invisibles de Tetúan here.

To see more pieces by Rey de la Ruina, visit his gallery on flickr. And his archive in tumblr. You can also check this post by Madrid Street Art Project.